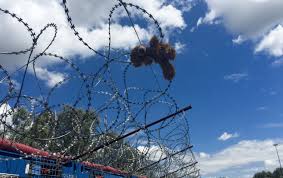 Before coming to CAIR Coalition, my experience with immigration law was limited to serving non-detained clients while working at Ayuda, L&L Immigration Law, and the Executive Office for Immigration Review.  Even as an intern serving the non-detained population, I witnessed a concerning amount of mental health issues within the immigrant population.  Many immigrants, even when free to move about the country, suffer from crippling anxiety due to fear of getting deported, symptoms of posttraumatic stress disorder, and depression.  However, the surge in detention from the current administration adds additional mental health concerns on top of the already chilling lives of many immigrants in the United States.

During my time working with CAIR Coalition, I have been shocked to witness the prevalence of mental health illnesses within the detained immigrant children population. Detention often exacerbates existing mental health issues or triggers the onset of new mental health problems for children.  Specifically, in secure facilities, children are not accustomed to frequent confinement, restraint of freedom of movement, and decreased autonomy.  The stark contrast from living outside the walls of detention versus within a detention center is sometimes enough to lead children to resort to violence, self-harm, and other unhealthy outlets for their depression and anxiety.

This forced confinement creates a vicious cycle.  While a child may not have actually been a “danger to society” when placed in detention, the difficult conditions that a child endures in the detention facilities take a toll on a child’s mental health and sometimes, lead a child to lash out using violence. These violent side effects of detention sometimes result in criminal records.  At this point, the process has come full circle.  In other words, the impact of detention is often enough to transform an innocent, scared child into a child with major mental health issues manifesting themselves in the form of sometimes violent and criminal behavior.

Throughout all stages of the immigration process, immigrants with mental disabilities face obstacles and challenges.  Fortunately, protections exist within the immigration court system, thanks to the landmark case Matter of M-A-M-, which allowed for procedural safeguards for immigrants lacking the capacity to understand an immigration proceeding.  However, a major gap in the immigration system is providing strong mental health resources to immigrants.  It seems that psychologists and mental health services only get involved when it is “too late”, or once someone has self-harmed, attempted suicide, or resorted to violence against others.  It should be a priority for our government to assume that after fleeing horrible conditions in home countries, surviving treacherous journeys, and experiencing frustrating culture shock and confinement upon arrival to the United States, immigrant children will always benefit from a variety of mental health resources.