The Effect of Poverty on Immigration 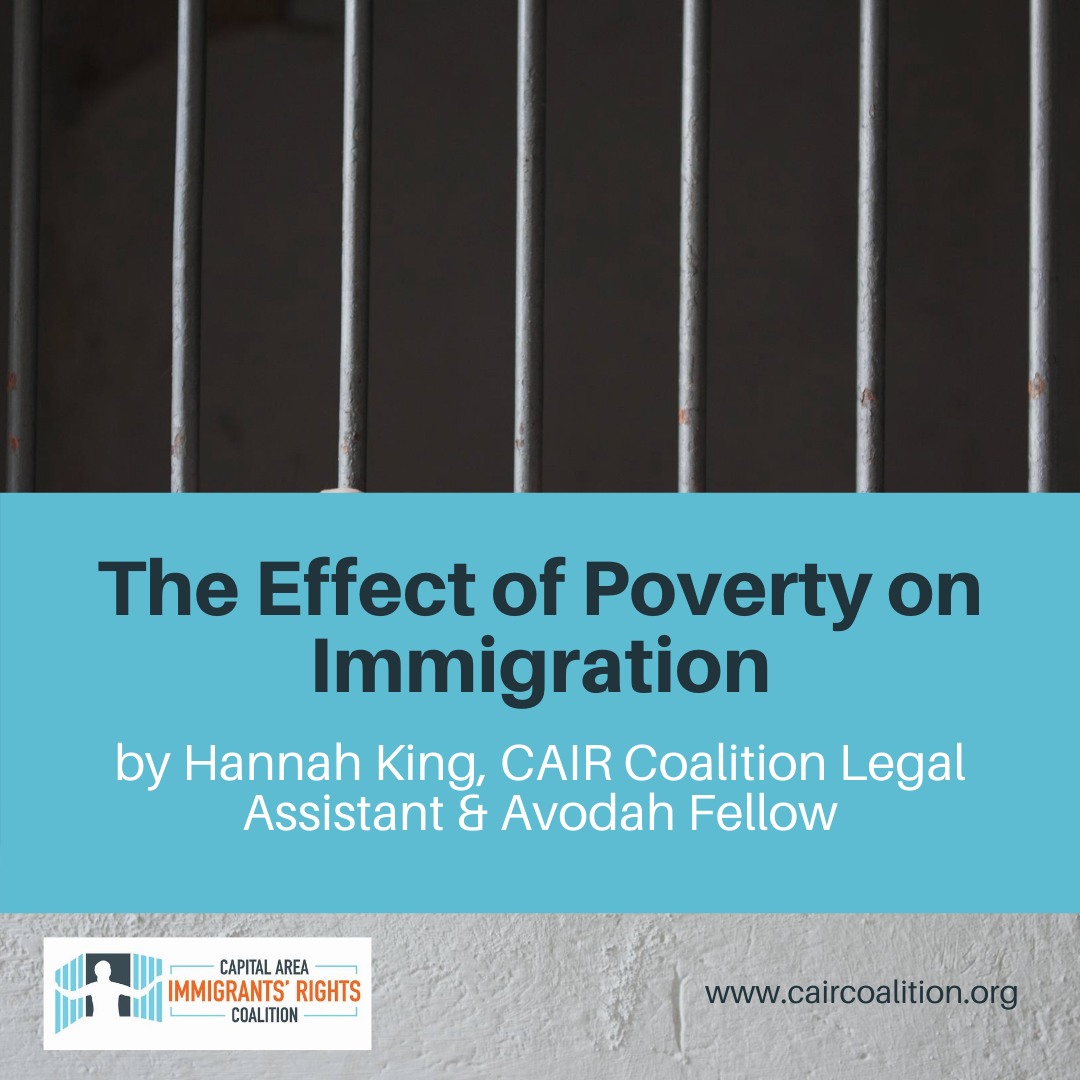 As a corps member with Avodah, a Jewish service corps, I was placed with CAIR for a yearlong position as a Legal Assistant. Avodah places corps members with nonprofits doing “anti-poverty work.” However, working at CAIR, I have gotten a number of questions about how immigration work is anti-poverty work. While it seems at first glance that immigration is maybe adjacent to poverty, but generally different social justice issues, working at CAIR with detained immigrants has shown me how closely tied the two are. As a legal assistant with the legal orientation program (LOP), I go on jail visits every month (when we are not in quarantine), providing general orientations, conducting individual intakes, and answering general questions. I also work with pro se follow ups, or people who are representing themselves in immigration court, helping answer their questions, contact family members, and compiling documents to submit to court.

Throughout the last nine months, I have been able to see how poverty affects the people I work with. Generally, people are either detained at the border, an airport, through raids, or from criminal custody. Most of the people I work with were transferred from criminal custody. Some are finishing serving long sentences, but some are transferred after being picked up for speeding and not having a driver’s license. They often get pulled over for nothing more than driving a few miles over the speed limit while being Hispanic or Black and end up at risk of being deported.

When a person enters immigration custody, their whole family suffers. Some of the people I work with are married to US citizens and have US citizen kids or parents. However, when they are detained, their family often loses the primary moneymaker and are put at risk. I work with some people who are eligible for bond, which means the judge decides they are not a flight risk or a danger to the community, and they have to pay money to ICE which they then get back if they show up to all of their court dates and don’t pick up other charges during their immigration court process. However, even if people win bond, the average bond is $5,000, which can be incredibly hard for families, especially undocumented families whose main source of income is detained, to pull together. If a person can’t get the money together for bond, this means they have to stay detained for their whole court process, which can take months or even more than a year. Meanwhile, their family struggles to pay rent, to take care of the kids, and to feed themselves. For others, bond is not even an option, as their criminal charges preclude them and require them to stay detained throughout their immigration proceedings.

One person I worked with this past year was eligible for bond, but had a very strong asylum case, which we would likely have been able to place with a pro bono team if he stayed detained. We explained the pros and cons of staying detained versus getting out on bond, and he was inclined to stay detained in order to fight his case faster and hopefully leave detention with a decision, rather than have it hanging over his head for years. However, as his detention dragged on, his partner and US citizen child were struggling to stay housed and fed without him there to help. Because of this, he decided to ask for bond and fight his case from the outside. If he had been able to fight his case from detention, he likely would have had a decision by now, but instead, he has to wait, likely for years, for a resolution.

CAIR Coalition, along with the American Civil Liberties Union (ACLU), ACLU of Maryland, and Sanford Heisler Sharp LLP., has brought litigation in Maryland for people who are unable to pay their bond. After many years of working to bring this case to court, Maryland judges are now required to consider a person’s ability to pay and take this into consideration when deciding how much to set bond at, if the government does not prove that the person is a flight risk or danger to society. This is a huge step in ensuring that people can pay their bond in order to be home with their families and able to continue supporting them.

Immigration detention, like many other social issues in our country, continues to predominately affect people with low incomes who are struggling to survive and support loved ones. CAIR and other organizations are continuing to fight for people who are affected by poverty and immigration, but we have a long fight ahead of us.