CAIR Coalition works with thousands of adults and children each year.  We provide pro bono support on a wide variety of cases, from asylum to green card defense to SIJS to habeas petitions.  Many cases we staff with our in-house experts, and we place other cases with private attorneys who take on clients on a pro bono basis.  The following are the types of cases we generally place on a pro bono basis with private attorneys.

Asylum is available to children with a well-founded fear of persecution in their home country on account of race, religion, nationality, membership in a particular social group, or political opinion. Your pro bono role would include preparing the application and submitting it to the U.S. Citizenship and Immigration Services (“USCIS”), accompanying the child to a non-adversarial asylum interview by a USCIS official, and appearing in Immigration Court to inform the Court of the USCIS process. In the event that USCIS refers the case to Immigration Court rather than granting the child asylum through the interview process, you would then represent the child at a merits hearing (typically one-half day in length) in Immigration Court.

SIJS is available to unaccompanied immigrant children who have been abused, neglected, or abandoned; who cannot be reunified with one or both parents; and for whom returning to their home country is not in their best interest. SIJS requires three approvals, one from a state family court and two from USCIS. Your pro bono role would include appearing in state family court to obtain findings that the child meets the requirements for SIJS, preparing and submitting an SIJS application package with USCIS, and appearing with the child at a USCIS interview, if required. You would also represent the child in applying for a green card (the second USCIS application), which provides the child with lawful permanent resident (LPR) status.

Certain lawful permanent residents (LPR) who find themselves in removal proceedings as a result of criminal charges can apply for a one-time discretionary waiver that permits the cancellation of removal and allows them to keep their green card. Your pro bono role would include preparing an application that demonstrates your client’s qualification for cancellation of removal and highlights the positive equities of your client’s background and appearing in Immigration Court for a merits hearing.

This version of cancellation of removal is available to noncitizens who have been present in the U.S. for at least 10 years. It is a one-time chance to obtain a green card upon establishing that they have good moral character and that denial of their application would result in extreme hardship to a parent, child, or spouse who is a U.S. citizen or a green card holder. Your pro bono role would include preparing an application that demonstrates your client’s qualification for cancellation of removal and highlights the your client’s good moral character and the hardship that would result to their qualifying relative if they were to be deported and appearing in Immigration Court for a merits hearing.

A special form of relief available to noncitizens who face prolonged or indefinite detention, with the goal of securing their release. The habeas petition is filed in the federal district court near the detention facility that holds your client. Our pro bono teams represent both adults and children in habeas proceedings.

Board of Immigration Appeals (BIA Appeals)

A BIA appeal asks the Board of Immigration Appeals to review a decision issued by an Immigration Judge. These cases are adjudicated entirely on the papers, beginning with the form EOIR-26 and then through a written brief.

A T-Visa is available to noncitizen victims/survivors of human trafficking who are in the U.S. on account of that trafficking, and who would suffer extreme hardship if removed from the U.S. T-Visas are available to both children and adults. Your pro bono role would include preparing an application and submitting the paperwork along with form I-914 to USCIS. Adult applicants must also include a certification from law enforcement officials. There is no interview or hearing.

A U-Visa is available to noncitizen victims/survivors of certain serious crimes who have been, or will likely be, helpful in the investigation and prosecution of those crimes.  U-Visas are available to both children and adults. Your pro bono role would include securing a certification from law enforcement officials that the applicant was helpful and submit the certification with form I-918, a cover letter, and a personal statement to USCIS.  There is no interview or hearing.

For a brief overview of the procedural timeline of some of these types of cases see below: 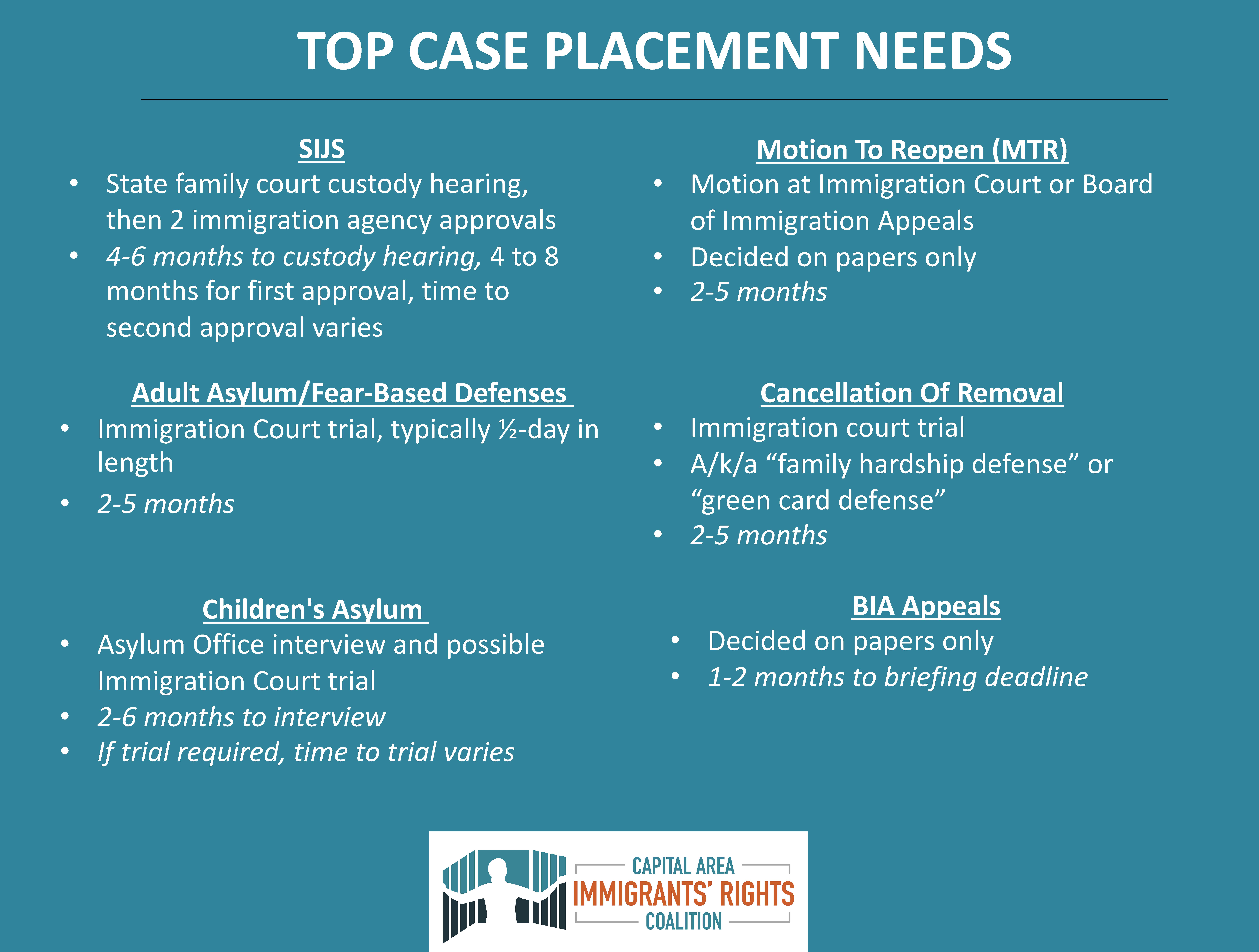